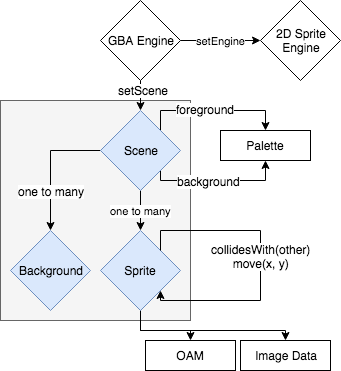 If you want to create bigger maps than 32x32, use MAPLAYOUT_64x64 or similar in the second constructor.

Creating sprites is easy with the SpriteBuilder. Specify what kind of sprite you want to make as a template argument (<Sprite> or <AffineSprite>) and specify your data .with...(). Done? Call build() to get a copy or buildPtr() to get a copy wrapped in a unique pointer.

The demos will be in cmake-build-debug/demos/demoname.gba.

Tested and working under Windows 10. Use MinGW or Cygwin, and add the -G "Unix Makefiles" option to your cmake ./../ command.